The Ezhotspot has an Over-The-Air   (OTA) firmware upgrade  feature. It can detect latest firmware availability online and you can directly upgrade the Ezhotspot without the need of connecting to a computer or laptop.

Once a newer firmware is prompted, you can use the  OTA Firmware Upgrade  Menu in the  Configuration & Status  menu to download the newer firmware directly to the Ezhotspot. 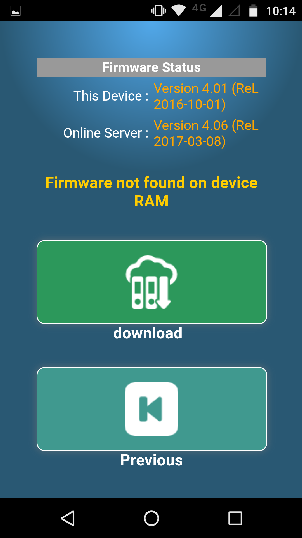 After downloading, an automatic validation check of the downloaded firmware against the firmware online will prompt whether it is safe to proceed upgrading firmware. 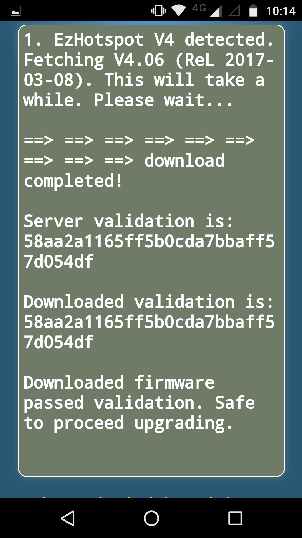 After updating my EZ hotspot extender v4 to the latest available version, it restarted. I can now see the SSID, but when connecting to it it keeps trying but never connects. What can I do to fix this After a  firmware update, the wireless key is reset back to factory default as shown on the label underneath the…

After a  firmware update, the wireless key is reset back to factory default as shown on the label underneath the device. It is also the serial number of the device.

When there is a new official firmware upgrade available, it will appear in the V4 (see below picture).

* Beta firmware with newer features may be currently circulated for user acceptance test purpose and may not be publicly available, until a later date.

No response from ezhotspot after firmware upgrade. LED is blinking after 15 minutes. No SSID broadcasted Remove any LAN or networking cable from the LAN and WAN ports of the EZhotspot Extender. Power up or reboot…

Remove any LAN or networking cable from the LAN and WAN ports of the EZhotspot Extender.

Power up or reboot the EZhotspot Extender.

For V5 -  After approximately 12 minutes, LED should be stable with occasional Blue-Green LED blinking

For V4 -  After approximately 9 minutes, LED should be stable with occasional Blue-Green LED blinking

Check if SSID ez@XXXXXX is broadcasted and join to SSID.

Click on the  Reboot  menu or physically remove power and insert power to the EZhotspot Extender to confirm again.

When the SSID ez@XXXXXX starts broadcasting, the new firmware is now operational.

Is the V4 router still under active maintenance ? I noticed that the has been a RC versie 4.56 (december 2019) but never released formally. Yes, we actively maintain security patches and whenever possible, more improved and enhanced features. The official OTA release date for…

The official OTA release date for 4.56 was initially scheduled for Dec 19 ~ Jan 20, which primarily enhanced response time of the EZhotspot extender. However, due to the COVID-19 situation and that a version 4.58 was also in the works, we decided that the OTA release should be postponed until the version 4.58 is finalized.

Version 4.48 is still the current production firmware while some recent users might find that their device is already on 4.56 when delivered.

However, for the users with version 4.48, they are able to download the latest firmware and manually upgrade. Kindly see link below:

Version 4.58 will be officially released and available in the Over-The-Air Upgrade menu, scheduled in May/June period. It has an feature that creates a QR code of the SSID created by the EZhotspot. Owners of the EZhotspot can easily let another person scan the QR code with an Iphone to join the SSID, without having to share the wireless key.

Thank you for your patience and support.

How to download the firmware on a IOS tablet or windows note boog at the shore and go later back on board in the sailboat and connect to the EZWIFI Upgrade On Windows devices: Browse to firmware section and download firmware for your device type. For V4, the version is always…

There is a youtube video guide for the iOS here - https://www.youtube.com/watch?v=JKqtLo8FY8I

Wanneer wordt firmware versie 5.71 vrijgegeven? Firmware 5.71 for V5 is now released, but at this moment for manual upgrading only. You can find instructions below…

Firmware 5.71 for V5 is now released, but at this moment for manual upgrading only. You can find instructions below for manually upgrading your device.

It is tentatively scheduled to be released in Jan 2020 for Over-The-Air (OTA) downloading directly to the EZ device.

If the LED is constantly Green, please see if the following procedure helps. It requires a manual flashing with some pre-requisites.

If there is LED blinking activity: